Did you know that more than half of an average person’s day is spent being sedentary — sitting, watching television or working at a computer? We know that this much inactivity isn’t good. And, even if you engage in some physical activity, this alone may not be enough to reduce the risk for disease.

How much uninterrupted chair time do you log each day? Are you what I would call a “chair warrior” sitting for 6+ hours a day at home or work? 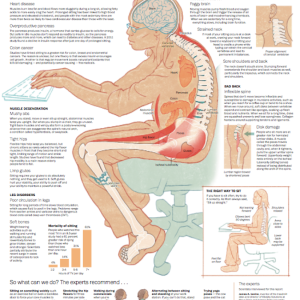 In the last few years, several researchers have deemed that in certain ways, sitting is the smoking of our generation. This is partly due to many jobs being converted into sitting behind a screen, which means people are sitting for much longer today than they did a generation ago.

But the reality is, sitting isn’t bad. It’s sitting for long periods of time without moving that’s the problem. In fact, staying in pretty much any position for too long isn’t healthy.

So what’s the solution? For many people, having the option of working at a standing desk for periods of time throughout the day is ideal. Standing workstations have become extremely popular in the last several years and for good reason.

Here are some standing desk options, everything from the do it yourself set up to a high-end model with all the bells and whistles. 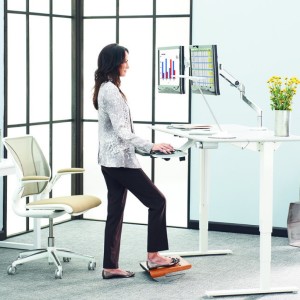 Now standing for 8+ hours a day at your fancy new workstation isn’t the greatest idea either. Our bodies were meant to move and they should move often. Sitting and standing alternately throughout the day is the best choice.

Changing positions every 30 minutes is optimal. This could mean sitting for 30 minutes, taking a 30 second standing stretch break followed by 30 min of sitting and then working at a standing desk for 30 min. I use this app to help remind me to keep changing positions when I am doing long periods of computer work.

Although standing desks may seem new, they’ve actually been around for centuries. Even Thomas Jefferson and Winston Churchill worked at standing desks.

Have I convinced you to give one a try yet? Give it a go! Your body will thank you.